French America’s Cup skipper Franck Cammas has been seriously injured in an accident while training aboard a foiling GC32 catmaran.

Cammas was at the helm of one of two training boats and sailing in Quiberon Bay, Brittany, today when he fell overboard and was run over by the rudder of the boat while it was foiling at speed, his team reports. His right leg was badly injured.

Cammas was quickly recovered by a support RIB and was taken to shore, where he was taken by emergency helicopter to Nantes hospital.

The GC32 is the new boat being used for the Extreme Series and is like a scaled down version of the America’s Cup foiling cats.

But compared to those catamarans, the GC32 has proportionally larger rudder T foils and centreboard J foils, and despite its relatively small size has recorded a top speed of 39.2 knots. 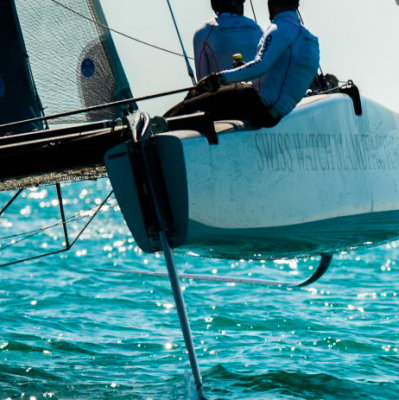 The GC32 has proportionately larger foils than America’s Cup catamarans

This is the second serious accident this year involving injury by a multihull rudder. In June, a woman had to have one leg amputated and surgery on the other following a collision with the 40m trimaran Spindrift 2. She was aboard one of the marshall boats at the start of the Volvo Ocean Race start from Lorient and was badly injured when Spindrift’s starboard rudder cuts across the RIB.

Cammas, 43, is one of France’s most talented sailors, with wins in disciplines as varied as the single-handed Solitaire du Figaro, ORMA trimarans and the Volvo Ocean Race. He is skipper of the French America’s …read more

June is a keen sailor and has been very helpful in the development of the Phuket Raceweek Website. View all posts by Phuket